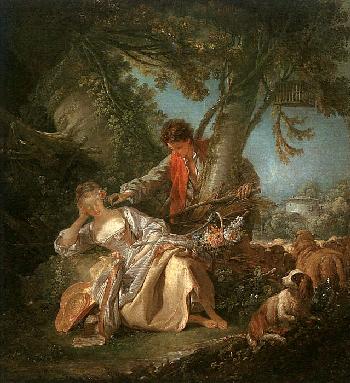 1687 - Newton's Mathematical Principles of Natural Philosophy summarized the workings of the universe and became the starting point for investigating everything in nature (WHT, p. 462).

1720-1790 - Age of Enlightenment - the period when scholars believed in the use of reason and in the scientific method. In the English colonies of North America, the ideals o the Enlightenment played a large part in sparking a revolution against Great Britain. These ideals of liberty and reason helped to shape the United States of America (WHT, p. 461)

1748 - Montesquieu's On the Spirit of Laws - "When the legislative and executive powers are united in the same person...there can be no liberty...Again, there is no liberty if the judiciary power be not separated from the legislative and executive [power]....Power should be a check to power. These ideas about separation of powers became the basis for the United States Constitution" (WHT, pp. 467-68)

1751 - Denis Diderot published the first encyclopedia, which brought together all the most current and enlightened thinking about technology, science, mathematics, music, art, medicine, government, law, geography, and more ( WHT, p. 464).

If we do not find anything pleasant, at least we shall find something new. - Voltair - Candide - 1759 - http://members.tripod.com/~mr_sedivy/quotes8.html

1762 - Rousseau's Social Contract - "Man is born free, yet everywhere he is in chains," meaning that liberty was every person's natural birthright, yet many were oppressed. (WHT, p. 468)

1768 - Captain Cook becomes the first European to reach and chart the east coast of Australia and the islands of Tahiti, New Zealand, and Hawaii (WHT, pp. 464-65).

1770 - Birth Ludwig van Beethoven, who's music was heavily influenced by the strenuous political and social tensions that ravaged Europe in the wake of the French Revolution went on to leave his mark on the world up until today.(http://lucare.com/immortal/)

1776 - Smith's Wealth of Nations: Declaration of Independence, argued that a free economy could produce far more wealth than an economy regulated by governmental laws. He rested his arguments on three so-called natural laws of economics: the law of self-interest, the law of competition, and the law of supply and demand (WHT, p. 467)

1776 - Constitution of the United States - Firmly based on the ideas of John Locke and the Enlightenment which said clearly that people had the right to rebel against an unjust ruler, as the English had done in the Glorious Revolution of 1688. Jefferson wrote, "We hold these truths to be self-evident, that all men are created equal, that they are endowed by their Creator with certain unalienable right, that among these are life, liberty, and the pursuit of happiness." (WHT, p. 475)

Amendment I - Congress shall make no law respecting an establishment of religion, or prohibiting the free exercise thereof; or abridging the freedom of speech, or of the press; or the right of the people peaceably to assemble, and to petition the Government for a redress of grievances. (http://www.nara.gov/exhall/charters/billrights/billrights.html)

1788 - Bill of Rights, ten amendments to the Constitution of the United States that protected such basic rights as freedom of speech, press, assembly, and religion (WHT, p. 479).

1789 - French Revolution started, marked by the storming of the Bastille (served in the 1700s as a jail for political prisoners) came about after the French people realized that the institutions of monarchy and feudalism which their ancestors had accepted no longer seemed reasonable (WHT, p. 483)

Worth checking out: Drawing Prompts - Each artist link provides an opening representative image suitable for drawing by students. Additional images and information are also provided to help students explore the vast posibilities of artistic expression