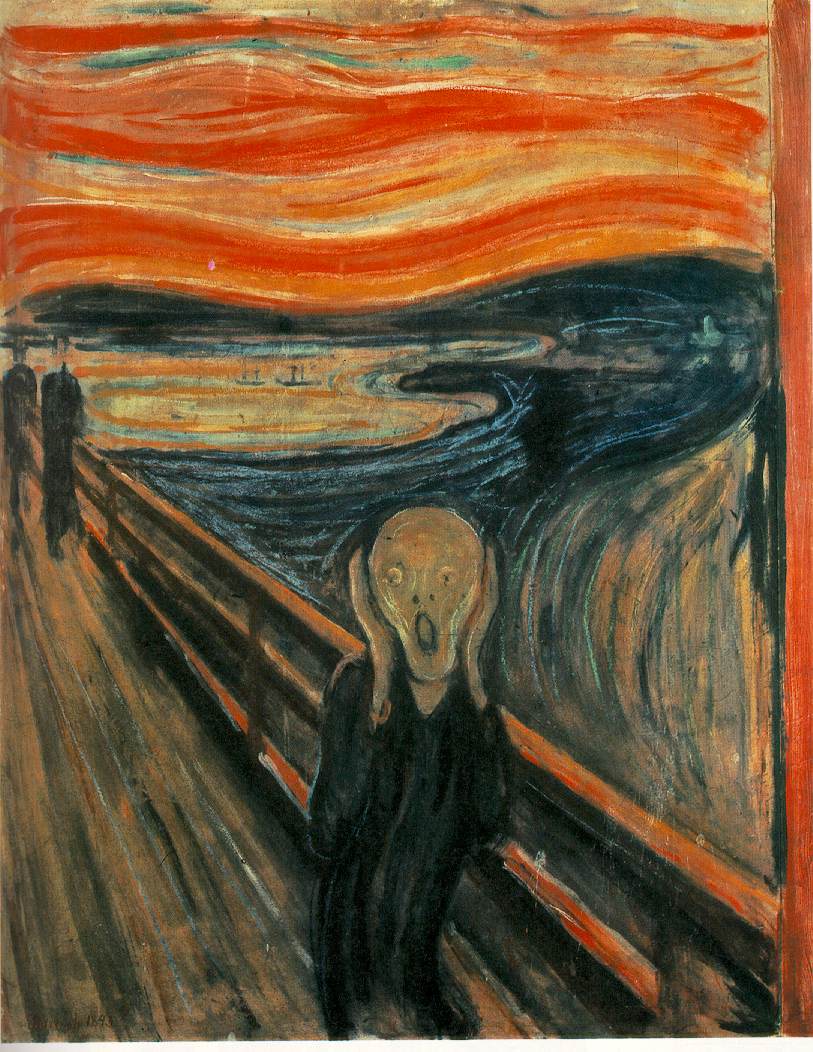 The bridge to the future | Top

Die Brücke (The Bridge) was the first of two Expressionist movements that emerged in Germany in the early decades of the 20th century. In 1905 a group of German Expressionist artists came together in Dresden and took that name chosen by Schmidt-Rottluff to indicate their faith in the art of the future, towards which their work would serve as a bridge. In practice they were not a cohesive group, and their art became an angst-ridden type of Expressionism. The achievement that had the most lasting value was their revival of graphic arts, in particular, the woodcut using bold and simplified forms.

The artists of Die Brücke drew inspiration from van Gogh, Gauguin and primitive art. Munch was also a strong influence, having exhibited his art in Berlin from 1892. Ernst Ludwig Kirchner (1880-1938), the leading spirit of Die Brücke, wanted German art to be a bridge to the future. He insisted that the group, which included Erich Heckel (1883-1970) and Karl Schmidt-Rottluf (1884-1976), ``express inner convictions... with sincerity and spontaneity''.

Even at their wildest, the Fauves had retained a sense of harmony and design, but Die Brücke abandoned such restraint. They used images of the modern city to convey a hostile, alienating world, with distorted figures and colors.

Kirchner does just this in Berlin Street Scene (1913), where the shrill colors and jagged hysteria of his own vision flash forth uneasily. There is a powerful sense of violence, contained with difficulty, in much of their art (http://www.ibiblio.org/wm/paint/tl/20th/expressionism.html).

1905 - Revolution breaks out in Russia in January after Bloody Sunday when czarist troops fire on marchers in St. Petersburg. The unrest leads to the creation of a State Duma and ends three centuries of autocratic rule by the House of Romanov.

One of the most influential scientists ever, Albert Einstein, a former patent clerk, proposes his theory of relativity.

Fauvism, named for its use of bright colors and bold brushwork, evolves in Paris. Participants include Henri Matisse, George Braque, and Raoul Dufy (http://www.historychannel.com/).

Theodore Roosevelt wins the Nobel Peace Prize for his role in negotiating an end to the Russo-Japanese War.

Maria Montessori opens the first day-care center in Rome. Her Montessori method of early childhood education, part of the progressive education movement, spreads through the world.

Lawyer Mohandas K. Gandhi begins a campaign of nonviolent resistance to protest the treatment of Indians in South Africa.

Picasso paints his portrait of American expatriate Gertrude Stein. Stein, Gertrude, 1874-1946, American author; b. Allegheny, Pa. She went abroad in 1902 and from 1903 until her death lived mainly in Paris. During the 1920s she led a cultural salon, acting as a patron for such artists as Picasso and Matisse and influencing such writers as Hemingway, Sherwood Anderson, and F. Scott Fitzgerald. Stein's own innovative writing emphasized the sounds and rhythms rather than the sense of words. Her works include short stories, e.g., Three Lives (1909); a long narrative, The Making of Americans (1925); autobiographical works, notably the Autobiography of Alice B. Toklas (1933); cubist poetry, e.g., Tender Buttons (1914); and operas, notably Four Saints in Three Acts (1934), with music by Virgil Thomson.

Pope Pius X declares modernism the synthesis of all heresies. Modernism, in religion, movement to reconcile developments of 19th- and 20th-cent. science and philosophy with historical Christianity. It arose from the application of modern critical methods to the study of the Bible and the history of dogma and stressed the humanistic aspects of religion. Its ideas permeated many Protestant churches and called forth a reaction in fundamentalism.

The panic of 1907 is averted when J.P. Morgan and a pool of investors shore up American financial institutions.

The Belgian Parliament takes over rule of the Belgian Congo from King Leopold II, instituting reforms and criticizing the king for the brutal exploitation of the colony .

The Christian Science Monitor is founded by Mary Baker Eddy.

The first large deposit of petroleum is discovered in Persia, marking the beginning of the Middle East oil boom.

An exhibit by the Eight marks the emergence of a new realism in American painting, later known as the Ashcan School. The artists in the movement include Robert Henri, John Sloan, George Luks, William Glackens, and later Edward Hopper (http://www.historychannel.com/).