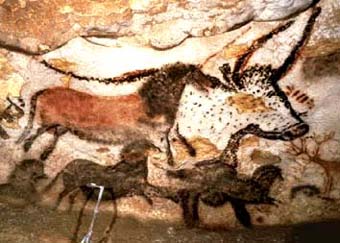 The First Bull - from Lascaux in the Great Hall of the Bulls - 13,000 BCE
http://www.culture.gouv.fr/culture/arcnat/lascaux/en/

Events that shaped the arts from the beginning of humans until 400 BCE.

9,000 BCE - The development of agriculture began with the growing of crops and the domestication of animals in the Middle East (HM, p. 498).

3,500 BCE - Sumerians, who lived in southern Mesopotamia, invent the wheel and the sailboat to help them transport goods (HM, p. 148).

The first pictograms were drawn in vertical columns with a pen made from a sharpened reed. Then two developments made the process quicker and easier: People began to write in horizontal rows, and a new type of pen was used which was pushed into the clay, producing "wedge-shaped" signs that are known as cuneiform writing. (http://www.upenn.edu/museum/Games/cuneiform.html) 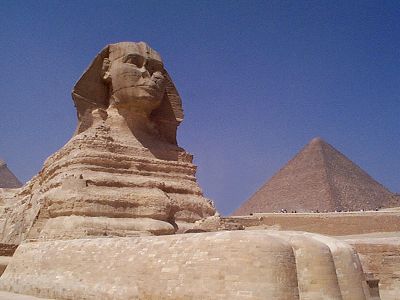 The Sphinx Controversy - A research team has discovered physical evidence that the Great Sphinx of Giza, Egypt, may date from 5000 and 7000 BCE and possibly earlier. In response, archaeologists have thrown mud at geologists, historians have been caught in the middle, and the Sphinx, having revealed one secret, challenges us to unravel even greater ones. http://members.aol.com/davidpb4/sphinx1.html

2,500 BCE - The Epic of Gilgamesh and the Epic of Creation, the oldest epic poems in world literature, were written in Mesopotamia (HM, p. 498).

2,300's BCE - Sargon of Akkad conquered the Sumerians and united all Mesopotamia under his rule, creating the world's first empire (HM, p. 498)

In Egyptian art, there was a strong sense of order, form and symbolism (certain items held certain meanings). The paintings especially were highly stylized and they told a story. The style of art in Egypt didn't change for three thousand years in part because the artists quite simply obeyed the rules set out for them.

Ancient Egyptian history and art can be divided up into the following periods:

The Step Pyramid of King Djoser of the Old Kingdom - designed for King Djoser (Dynasty 3) by his vizier Imhotep. The pyramid is located in Saqqara, the main necropolis of Memphis. -
http://www.memphis.edu/egypt/saqqara.htm

Amulet in the shape of an ibis - End of Old Kingdom - Gold -
http://www.artchive.com/artchive/E/egyptian/egyptian_6_ibis.jpg.html

This noble is spending his leisure time hunting fowl with his cat. His wife accompanies him, as many women did. Notice that the birds, and especially the fish, are painted very realistically, with attention paid to the slightest details, while the humans conform to the cartoon-like frontalistic style - Understanding Egyptian Art - (http://www.bergen.org/AAST/Projects/Egypt/art%5Freport.html)

The goddess Hathor and King Seti I - from the tomb of Seti I, Valley of the Kings, circa 1301-1290 BCE -
http://www.paris.org/Musees/Louvre/Treasures/Egyptian/

Sphinxes at Thebes - Many of the main roads which lead to the temples of Thebes (modern Luxor) used to be continuously lined with sphinxes. -
http://www.memphis.edu/egypt/luxortm.htm